8th April 2021 letter from CWCR to Town of Erin Solicitor

On 8th April 2021 The Coalition for the West Credit river submitted a letter to the solicitor for the Town of Erin.

The Coalition seeks clarification of several issues that have not been addressed so far.

The Coalition for the West Credit River, of which the Belfountain Community Organization is a member, wish to inform Mayor Alan Alls and Council (the “Town”) that the questions asked in our 18 February 2021 correspondence were either not addressed at all or not satisfactorily addressed in the final Environmental Study Report (ESR) for the proposed Erin Wastewater Treatment Plant (Erin WWTP).

The Coalition has carefully reviewed the ESR and found numerous information and process gaps, where decisions were made without a clear, transparent and traceable path to show how they were made. There were riparian landowners abutting and adjacent to the discharge infrastructure that were not informed or consulted. The Coalition has laid out our numerous concerns in our 25 February 2021 Designation Request submitted to Minister Jonathan Wilkinson, under Subsection 9(a) of the Impact Assessment Act (IAA).

The Coalition reached out in good faith to the Mayor, in the hopes that he would answer our questions, and perhaps resolve some of our concerns and make it unnecessary to take this matter to the federal level for a review under the IAA.  However, it has become crystal clear that the

Mayor was not acting in good faith when we were informed by the Town’s lawyer, Quinto Annibale, in his 10 March 2021 email to me, that “all of the questions and issues which were raised and answered during the Part 2 Order request made to the Minister of the Environment Conservation and Parks pursuant to the Environmental Assessment Act.  As you know the Minister considered each of these issues and refused to grant the Order. Since you participated in the Part 2 order request, my client sees very little useful purpose in answering the same questions again and therefore will not be responding to the detailed questions contained in your February 18, 2021 correspondence”.

It is obvious the Town had no answers to our questions, or it would have responded in a professional and reasonable manner.  For the record, none of our questions were answered in the ESR. Additionally, our 8 March 2021 letter to the Town, which set out our concerns over damage done to the Solmar property, was totally ignored with no response.

Damage to the Solmar Land:

In mid-December of last year, the Coalition and local residents of Erin noticed that work on the Solmar land had already commenced, with a forested area and brush being cut and burned, large trees pulled out by the roots with large construction machinery and grapple claws.

On Wednesday, 23 December 2020, Mayor Allan Alls made the Facebook post below in response to growing public concerns over a 10-liter hydraulic spill close to the West Credit River as well as the brush and tree cutting that occurred on the Solmar land:

It is concerning that the Mayor would just speak with the developer owner about an alleged violation and accept at face value that this was just “agricultural lands for crops” on “private property”, and it was just “farming activity”[1]. The Mayor must have been aware that this was highly sensitive greenbelt land that is designated as a provincially significant wetland, and that it would require more than just a call.  The Project ESR clearly identified the sensitivity of Site 1 (Solmar) which “transect or are adjacent to areas of the County’s “Greenlands System”, (includes both “Greenlands” and “Core Greenlands” designations)” and “exists throughout the general study area comprising much of the identified “Core Greenlands” lands”[2].

It would have been prudent if the Mayor had reported this damage to the municipal Bylaw Enforcement Officer, who would then ensure compliance with the municipal tree cutting and site alteration bylaws and report the damage to Credit Valley Conservation (CVC), to the Ministry of

Environment, Conservation and Parks (MECP), and/or the Department of Fisheries and Oceans (DFO).  This doesn’t appear to have happened and falls well below the standard of care that would be expected by a government official. Of course, the Mayor’s $2.00 purchase[3] of 5 hectares of prime real estate from Solmar for land valued in the ESR at $210,0004, raises even more questions about the appropriateness of how this was all handled.

In late February of this year the Coalition became aware of extensive damage done by the tree clearing, grubbing and grading which appears to have led to destruction of a first order Brook Trout nursery tributary to the West Credit River. There were numerous deep ruts cut into the streambed by large, heavy machinery (see Addendum 1) within areas classified as:

The Coalition is very concerned that this first order permanently flowing stream was badly damaged, as well as the provincially significant wetland and species at risk habitat that was likely destroyed by these premature actions. The area of fish habitat damage is approximately 100 m2 of active channel and approximately 3,000 m2 of contributing wetland area (groundwater recharge/discharge function). The wetland area is part of the Provincially Significant West Credit River Wetland Complex.

The damage done to this sensitive tributary and the trees that were cleared away and pulled out by the roots by heavy machinery were not on agricultural land, they were located in a Provincially Significant Wetland Complex and Greenbelt Natural Heritage System, and we have confirmed that there were no permits or authorizations issued for any of this work. The fines for this type of damage can be quite substantial, including orders for restoration.

The Coalition has carefully reviewed the ESR to see what habitat related to endangered or threatened species, Schedule 1 SARA species and migratory bird species may have been impacted by the premature removal of brush and trees.  The ESR stated, “Site 1 does provide suitable breeding habitat for the area sensitive Savannah Sparrow, and thus qualifies as significant wildlife habitat under the PPS. As such, development and site alteration are only permitted if there will be no negative impacts on the natural features or their ecological functions. Furthermore, Site 1 contained a rare and uncommon plant species (Wild Geranium) and is located next to the West Credit PSW Complex. Appropriate mitigation measures were therefore recommended to ensure no negative effects on species of conservation concern and important natural heritage features in the vicinity”[4].  “Eastern Meadowlark was also heard on the west side of Wellington Road 52 within the third proposed WWTP site (Site 1).”[5]  However, the ESR also stated, “Once the exact location is known we propose conducting additional bird surveys in the affected habitat to document whether any species at risk and sensitive species are present (such as Eastern Meadowlark, Bobolink, Savannah Sparrow) and formulate potential mitigation plans should they be required”[6].

We found no evidence in the ESR that these “additional bird surveys” were ever done, and it is unknown whether they were ever completed after the Solmar land, Site 1 was chosen, and before the damage was done to SARs, SARA, migratory birds and/or sensitive species habitats.

However, the ESR does say, “In carrying forward two recommended alternatives for the WWTP site through to the final ESR, it is recognized that the municipality will need to prepare an Addendum to this ESR to make a final site selection. The addendum will need to provide details of the events that have occurred and the rationale for making the final location decision8. There was no Addendum included in the Final version of the ESR, nor have stakeholders received or been made aware of any subsequent Addendum to the ESR.

A review of the 10 April 2018 Ainley response to Tara McKenna’s 16 March 2018 comments revealed that “An arborist report of all affected areas will be prepared as part of an overall Environmental Management Plan for the project during the design stage” [7]; however, there is no confirmation or information to indicate that either were ever done.

Additionally, the ESR noted that “based on the findings of the Stage 1 Archaeological Assessment (Background Research and Property Inspection), the following mitigation measures are required to protect/preserve archaeological interests. A stage 2 archaeological assessment is to be performed on the selected WWTP site 1 (Solmar).”10

Once the final site selection decision was made were the following ESR commitments ever fulfilled:

The deeper we go into the review of the ESR, the more concerns and questions we have.

Finally, in a letter dated 19 March 2021, the Coalition formally invited Mayor Alls to an online Community Meeting which took place on the 25th of March. On 22 March 2021, Mayor Alls informed by telephone that he would not be attending the Community Meeting because of the federal Designation Request, he cannot go near it; and that he doesn’t answer to the taxpayers of Belfountain, that they have their own Mayor they can talk to.

The Coalition for the West Credit River looks forward to your response. 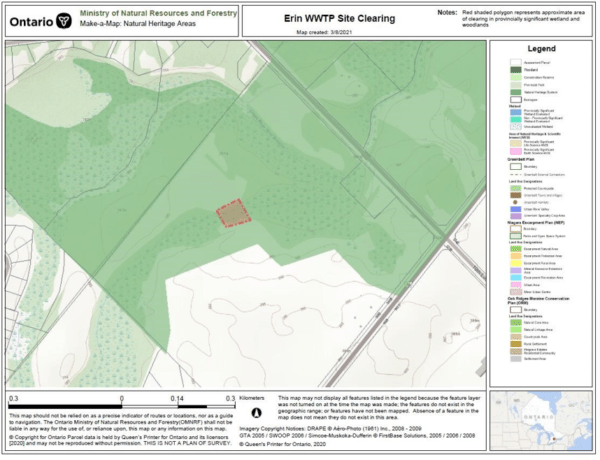 The following are photos of the damage in the Wetlands abutting the Solmar property: 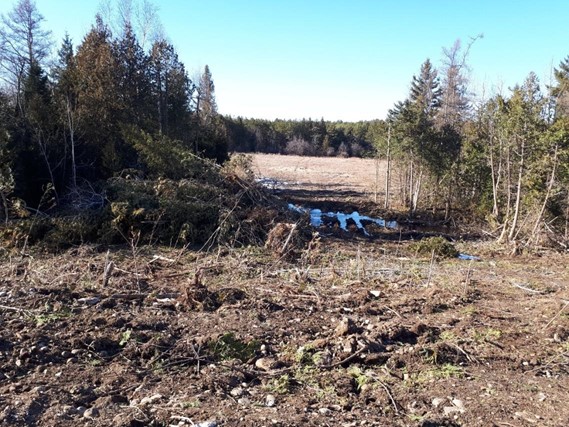 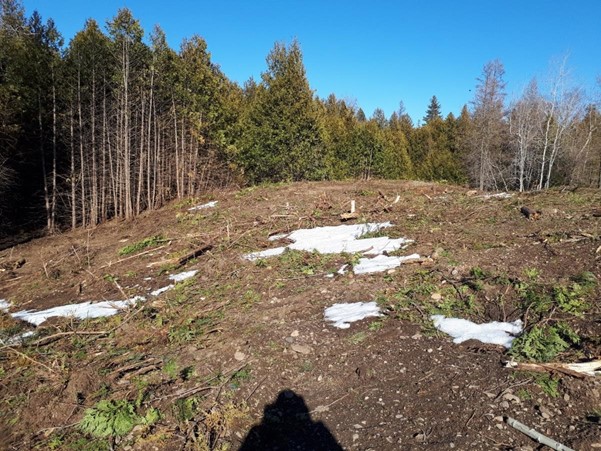 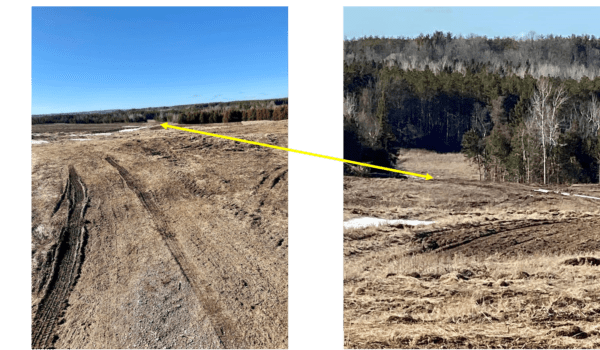 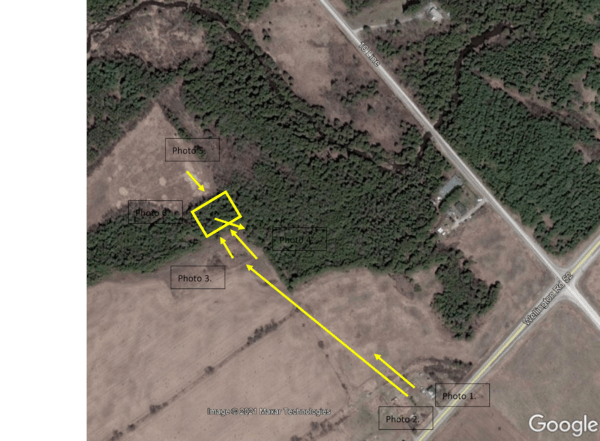 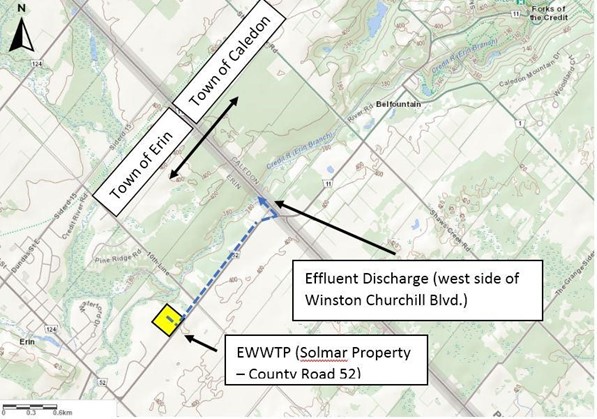 [1] Statement: Town of Erin Council on the Wastewater Treatment Plant