This is an original pattern that is designed specifically for the Rainbows of the Credit River, in Ontario.

The concept is to emulate a minnow chasing a floating egg sac. 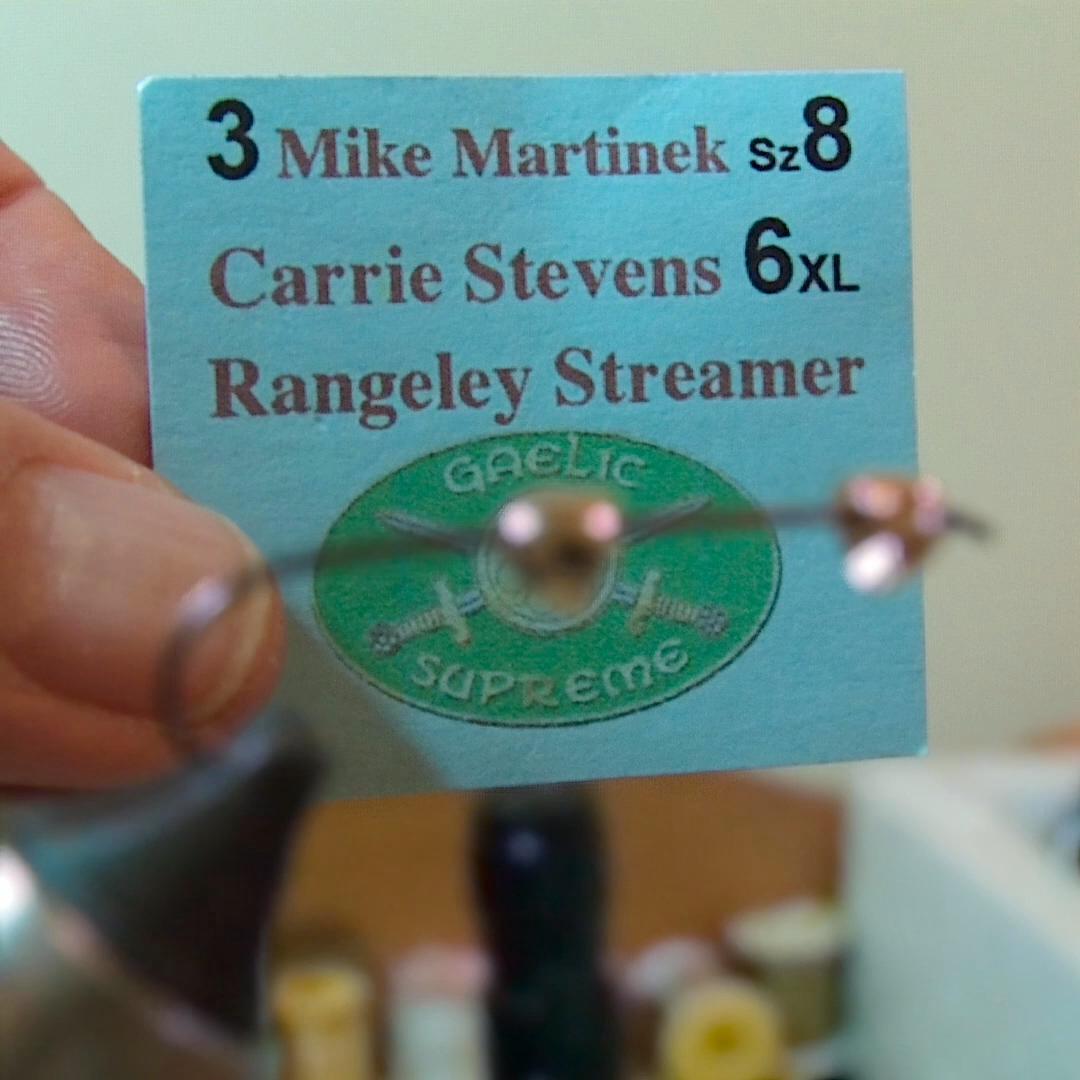 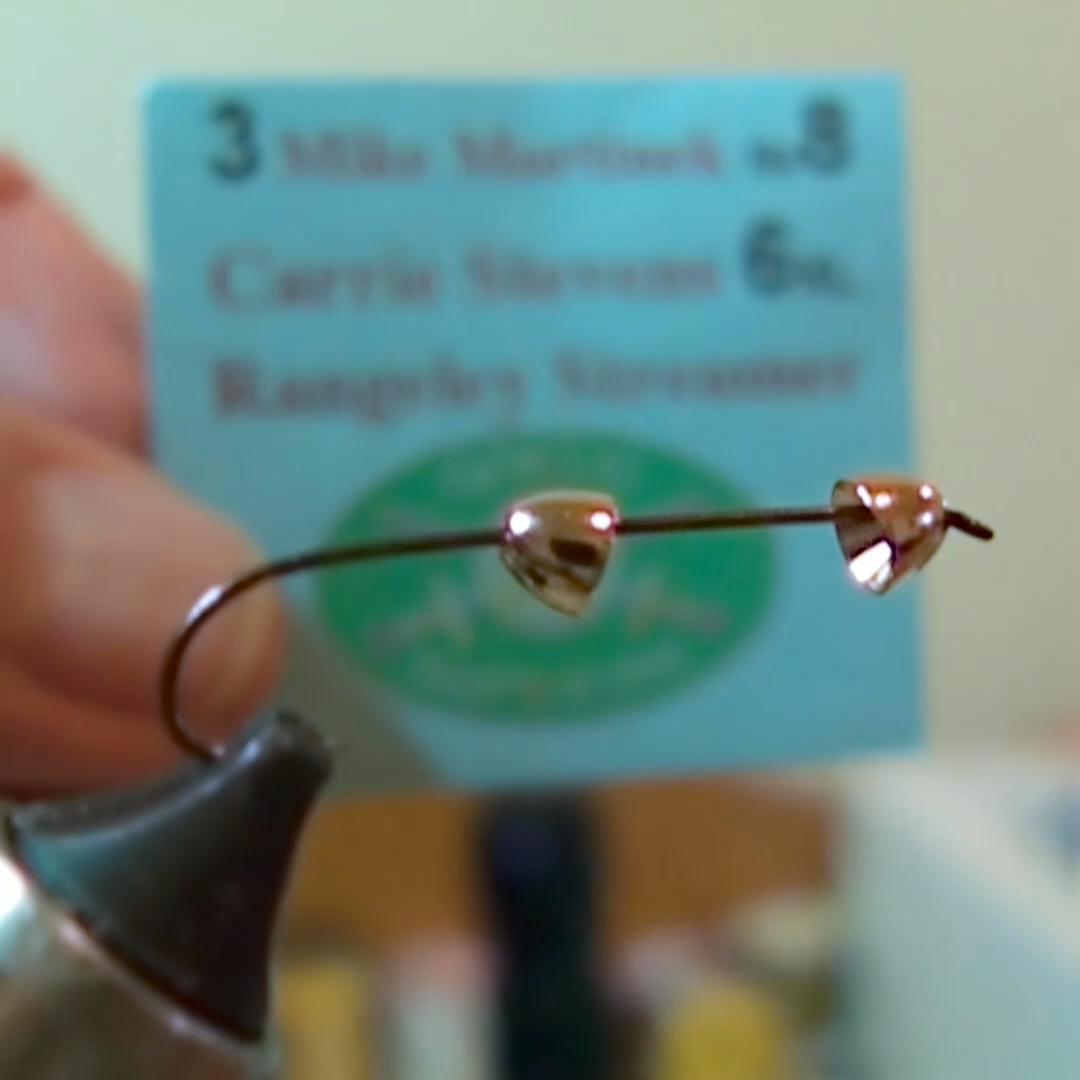 The center of the egg sac is comprised of two, back to back tungsten cones, glued together, and lacquered red or orange. 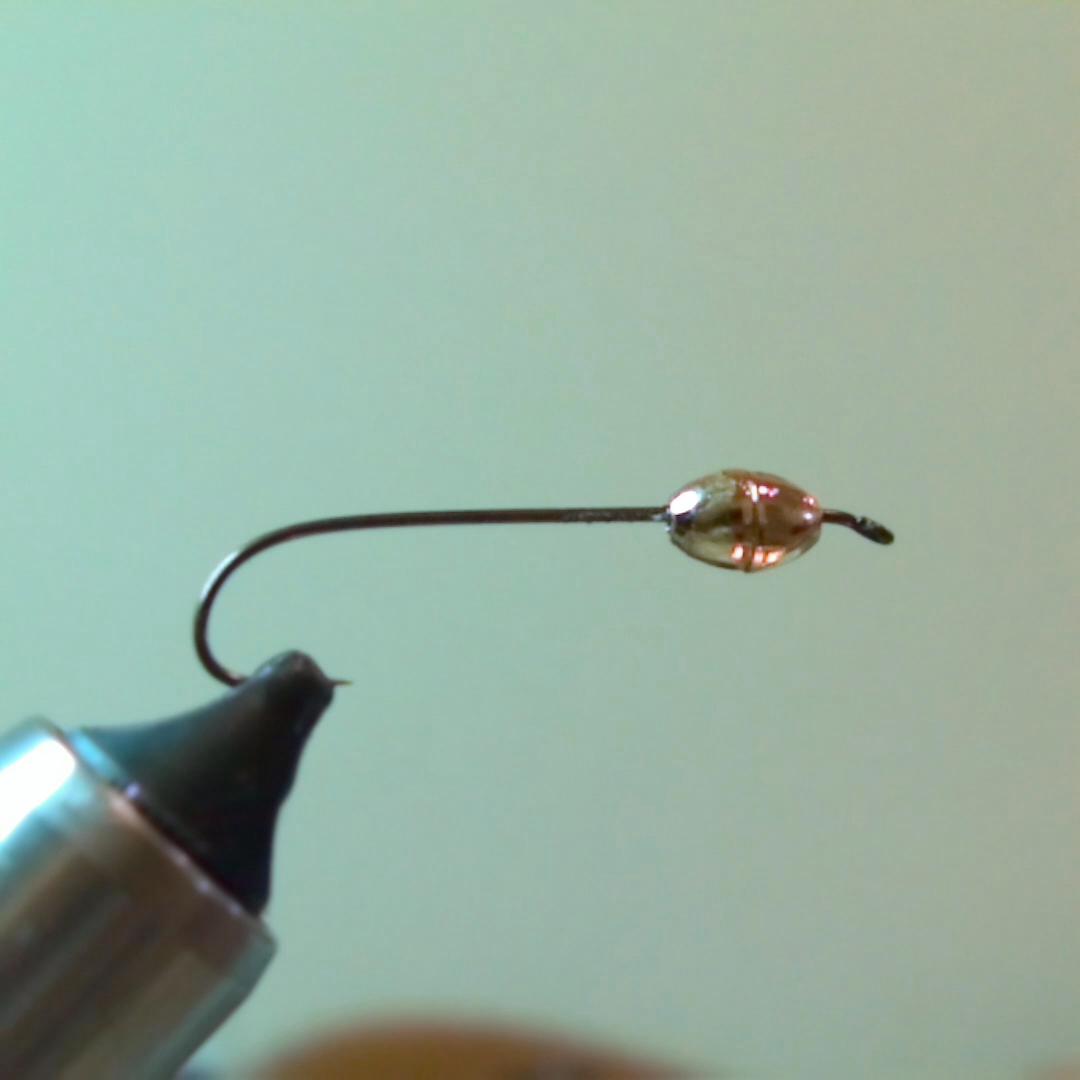 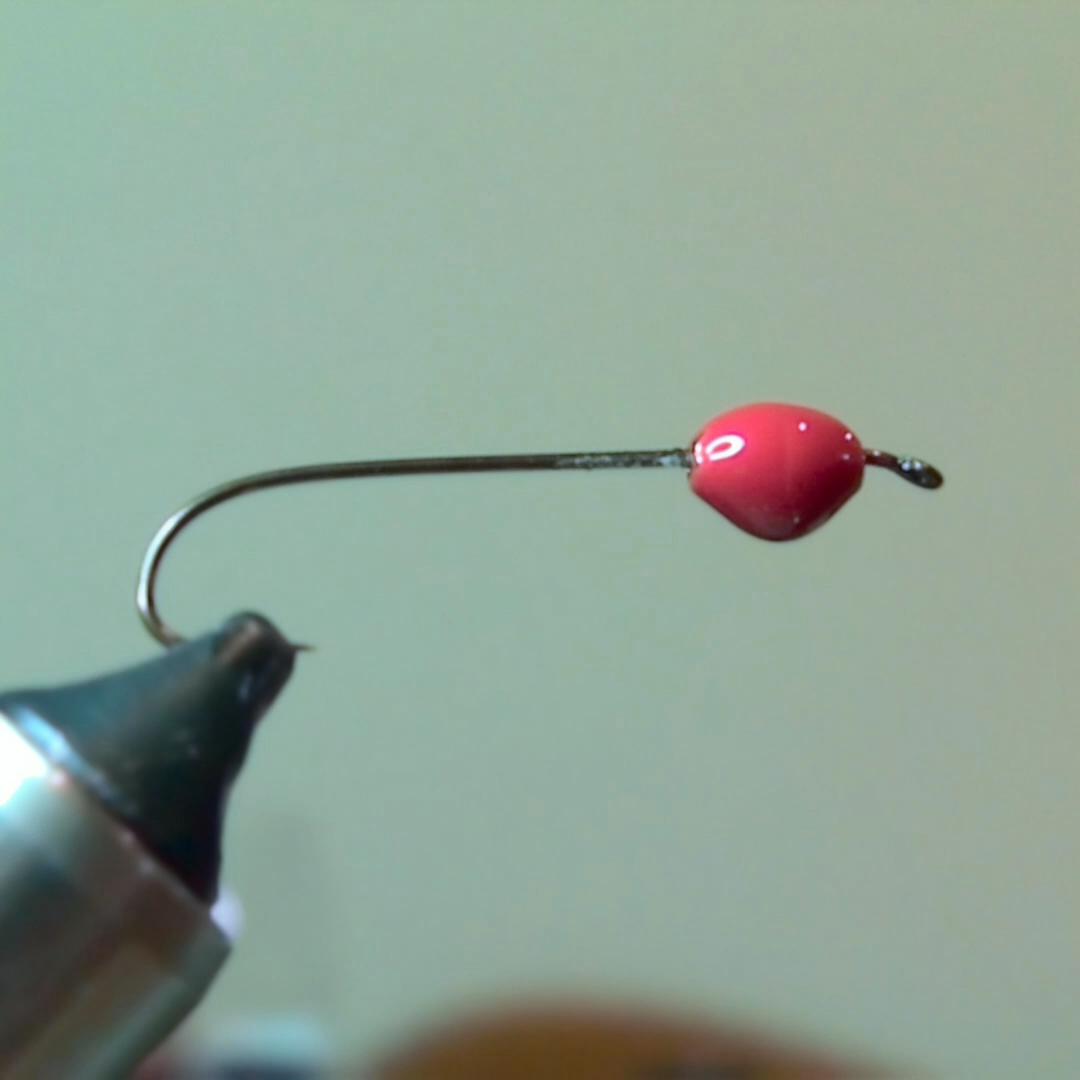 This resultant weighted core will sink quickly, eye downwards, and the trailing minnow will appear to be guddling downwards towards the egg sac. (The last picture above shows the lacquer still soft, and the hook will need to be turned to maintain a uniformity in roundness of the drying lacquer): 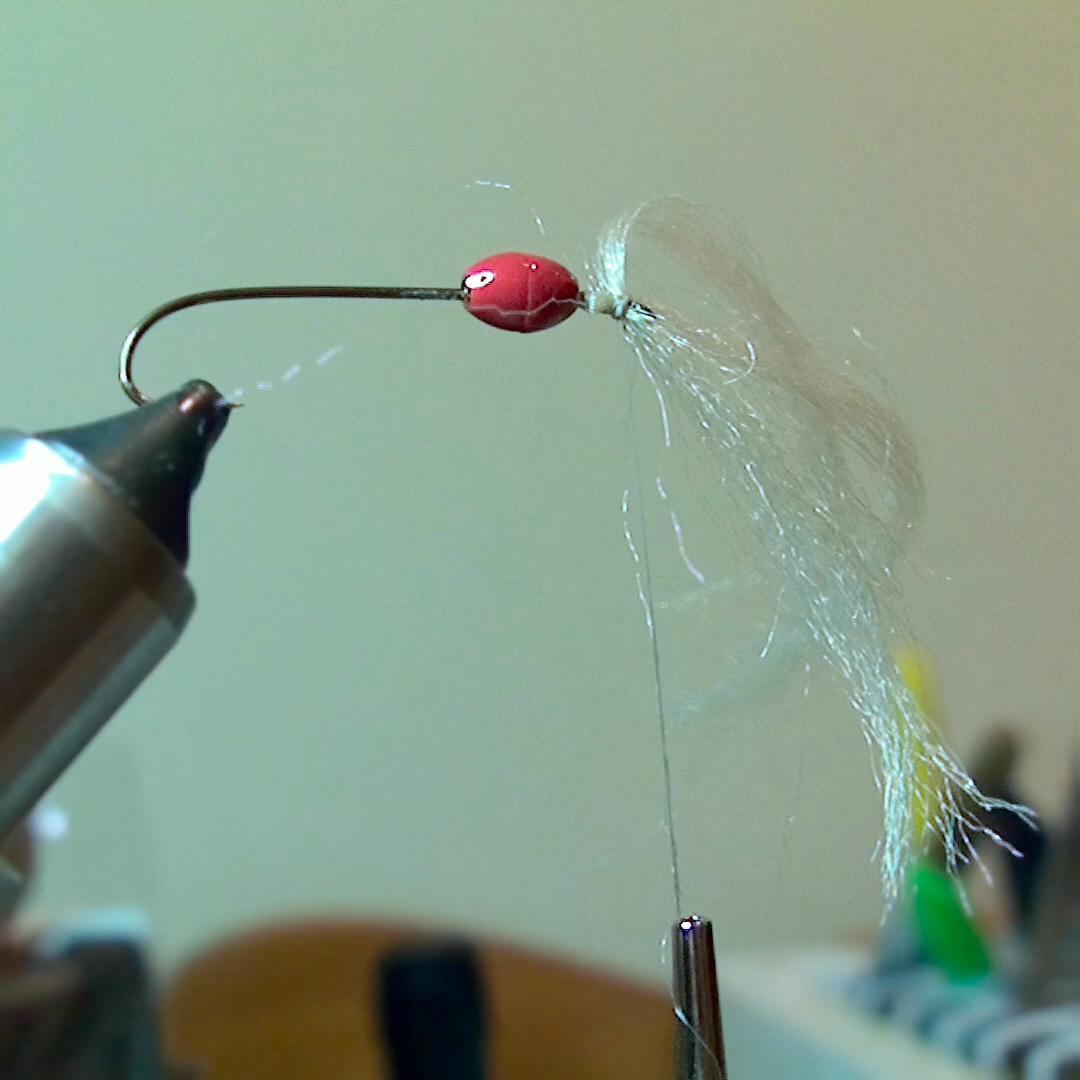 To complete the appearance of the forward egg sac, attach four pieces of tan Antron, or Zelon, just behind the eye of the hook and whip finish the thread, ( the thread is 6.0 Ultra UTC grey/brown).

Re-tie the thread behind the weighted head and run the thread towards the bend of the hook, using loose sparse turns; do not trim off the starting tag of the thread: 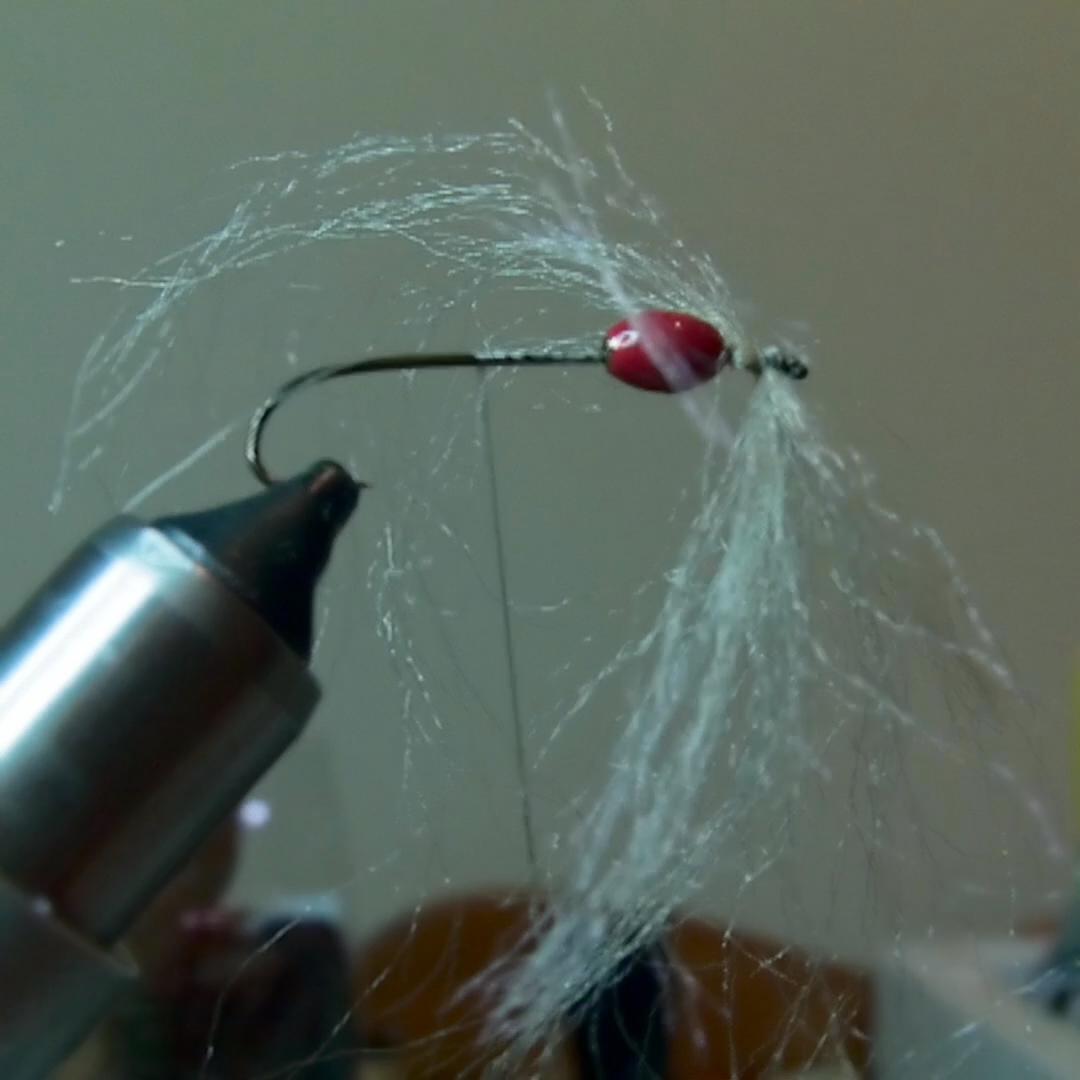 Pick apart and spread the Antron over the back of the weighted bead; then attach the Antron with three or four turns of thread: 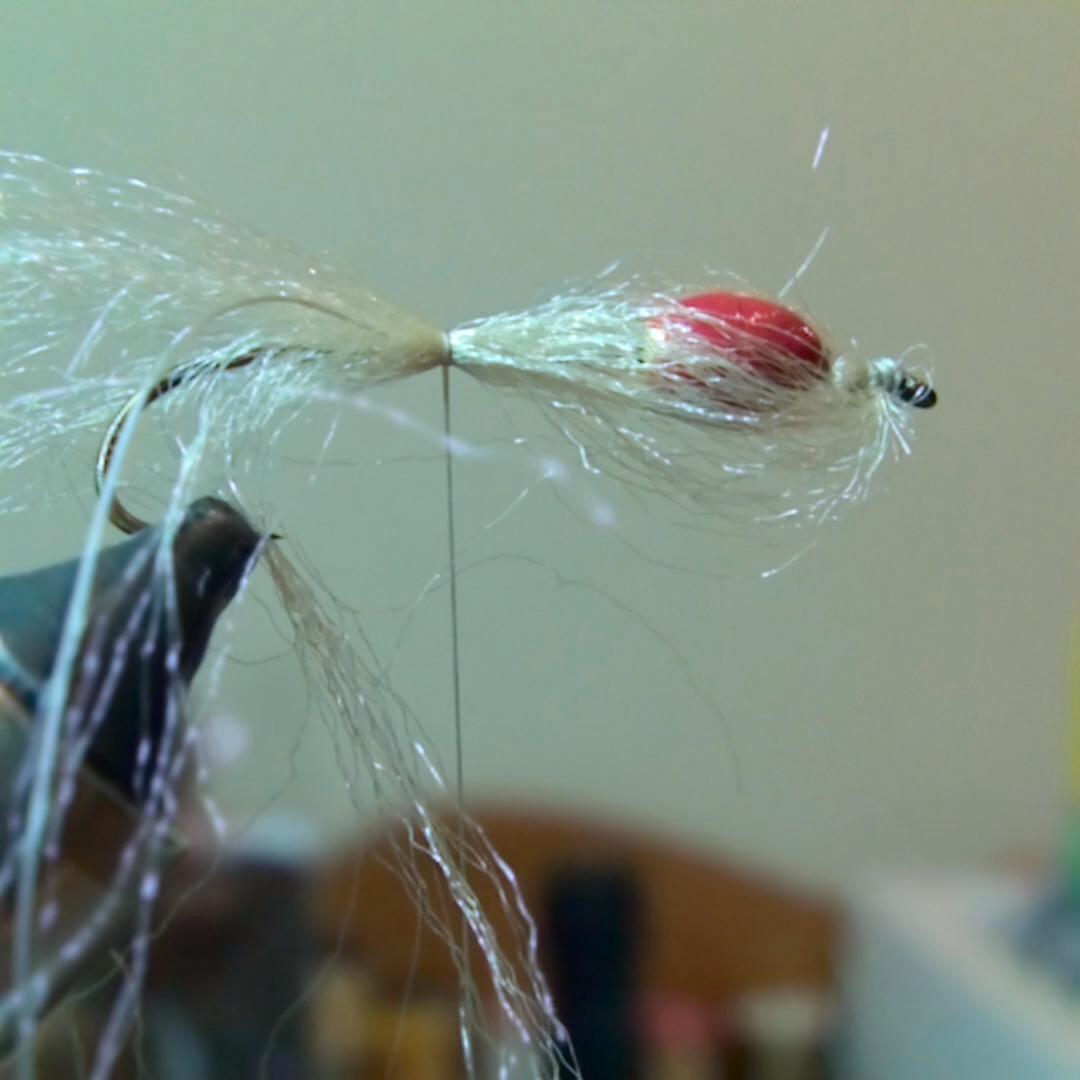 Now, using the starting tag end of the thread, and the loosely attached rear binding of the Antron, slide both forward towards the bead. This gives the “shell” of the egg casing a loose casing that will hold air when wet.Take the thread rearward opposing the flattened barb of the hook: 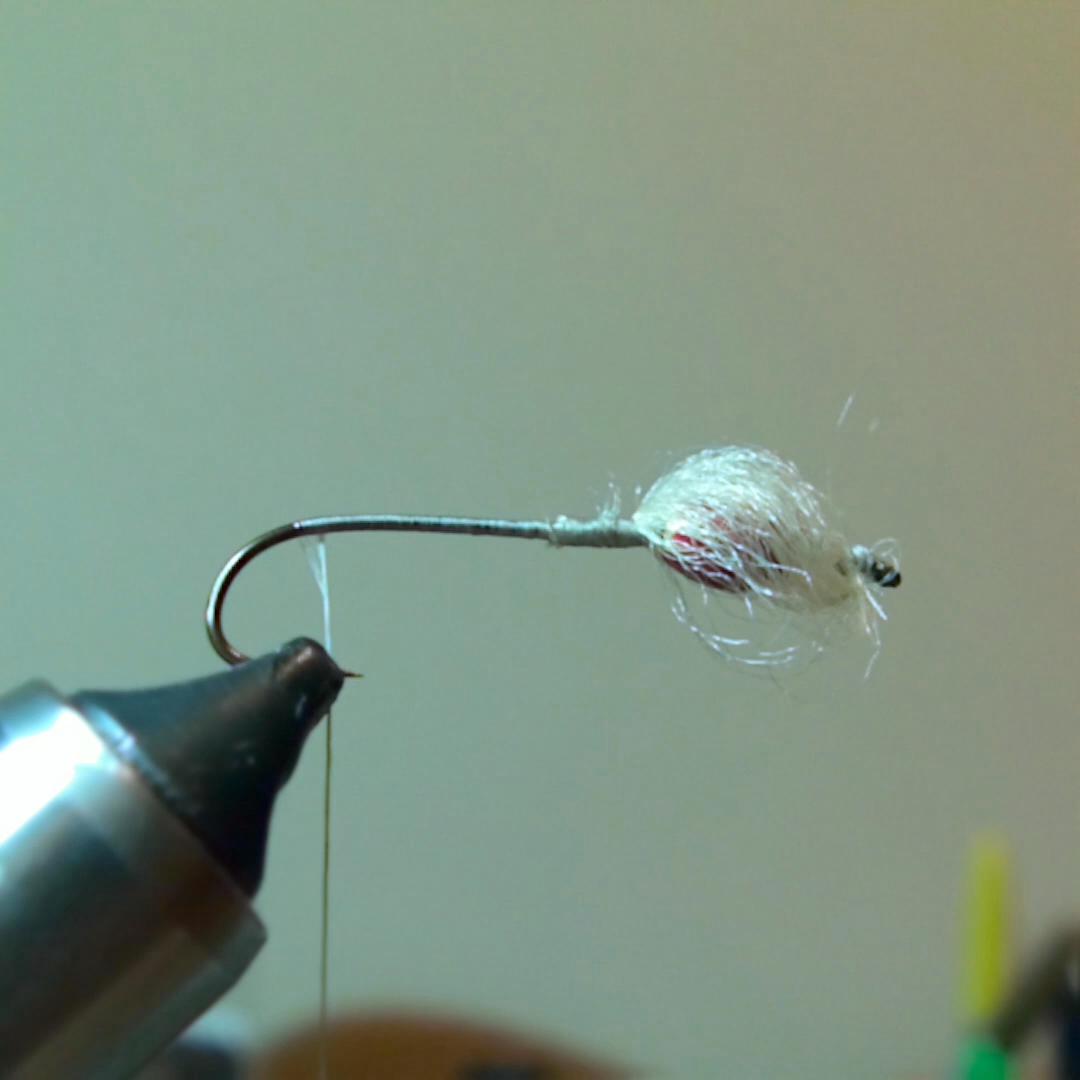 Tie in a 4″ piece of 20lb mono and a similar length of Axxel 6x Ra White yarn, or some pearl Mylar: 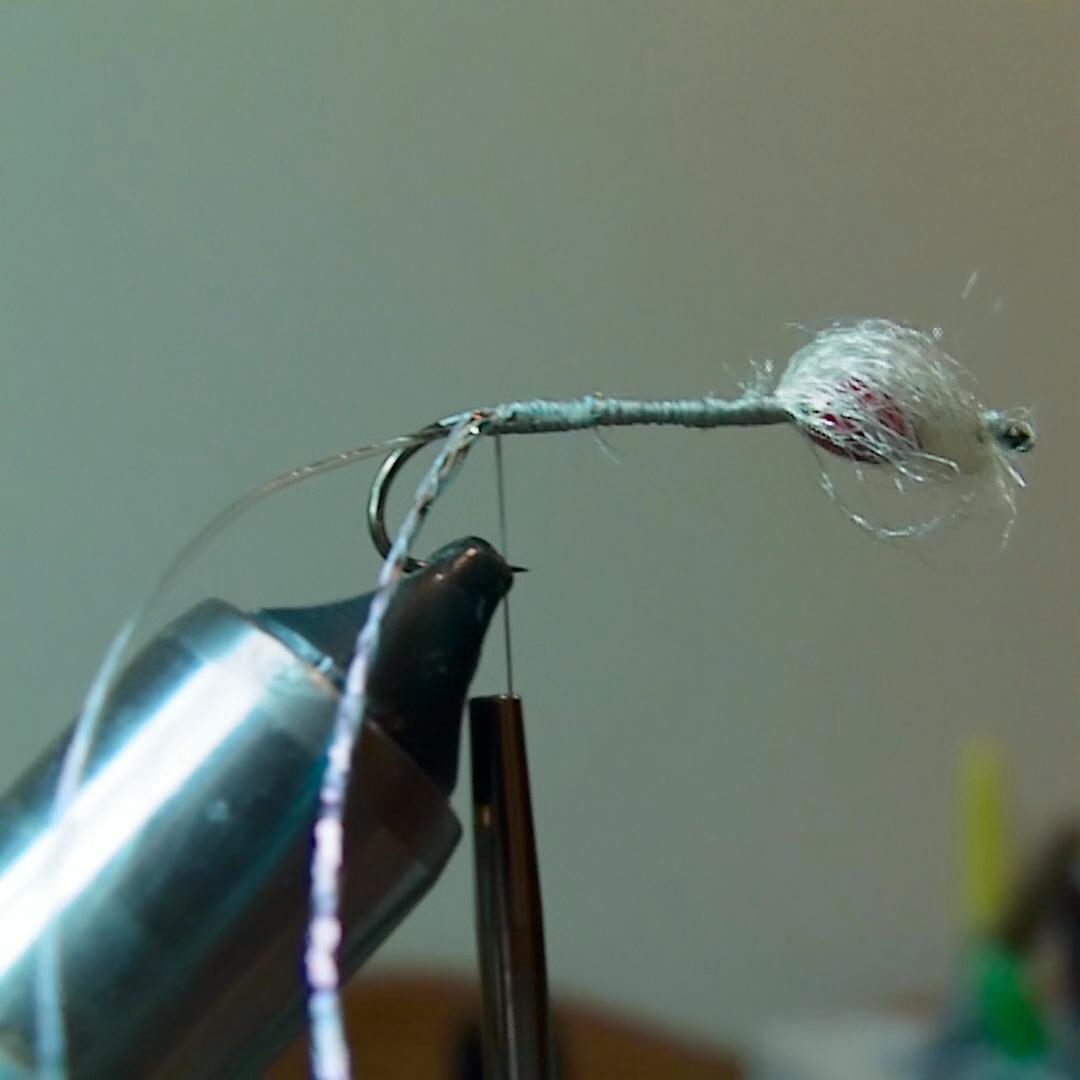 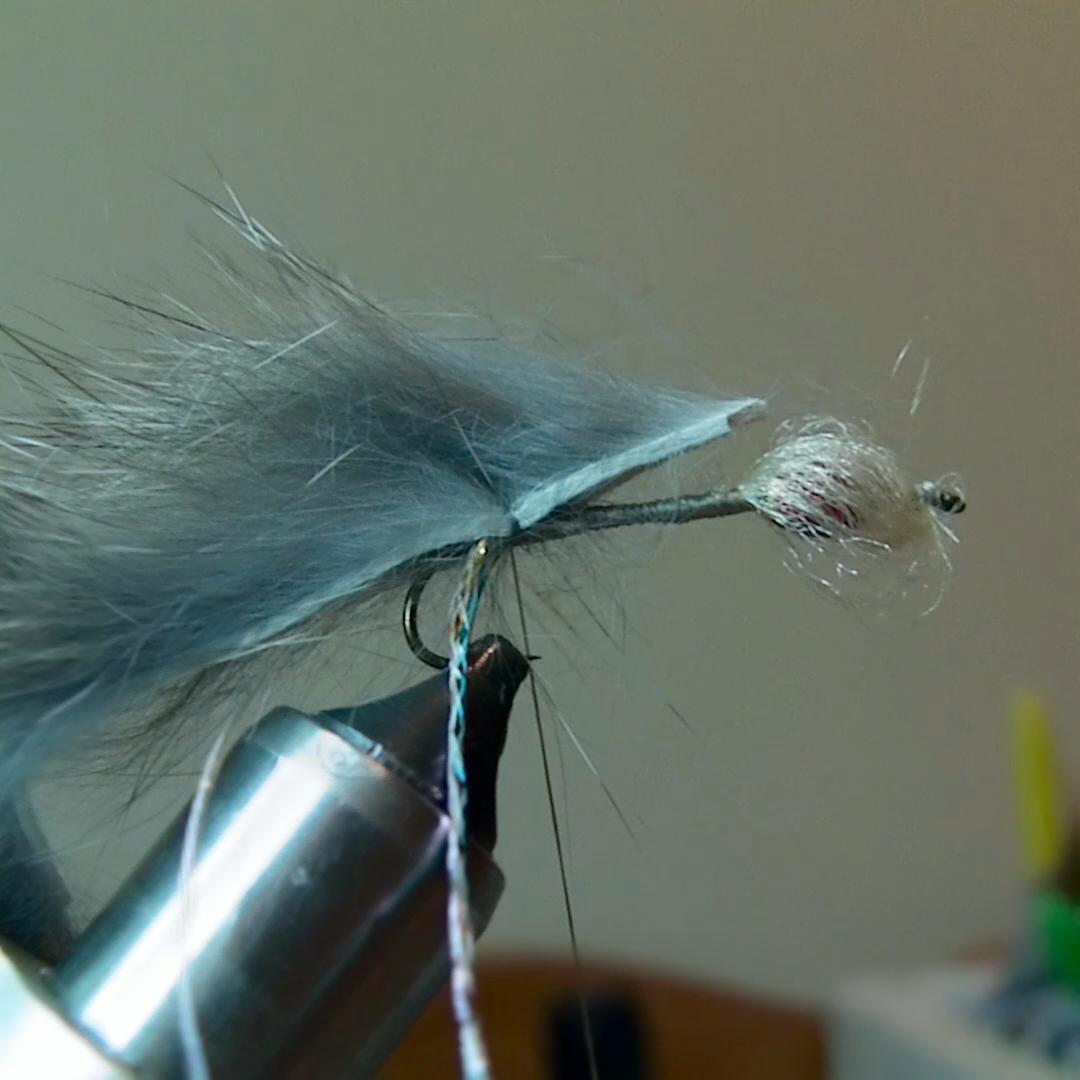 Run the yarn (or Mylar) in touching turns to the rear of the egg sac. Trim off the excess, and apply clear varnish or UV cement to the body, making sure to avoid the cement from getting into the egg sac area: 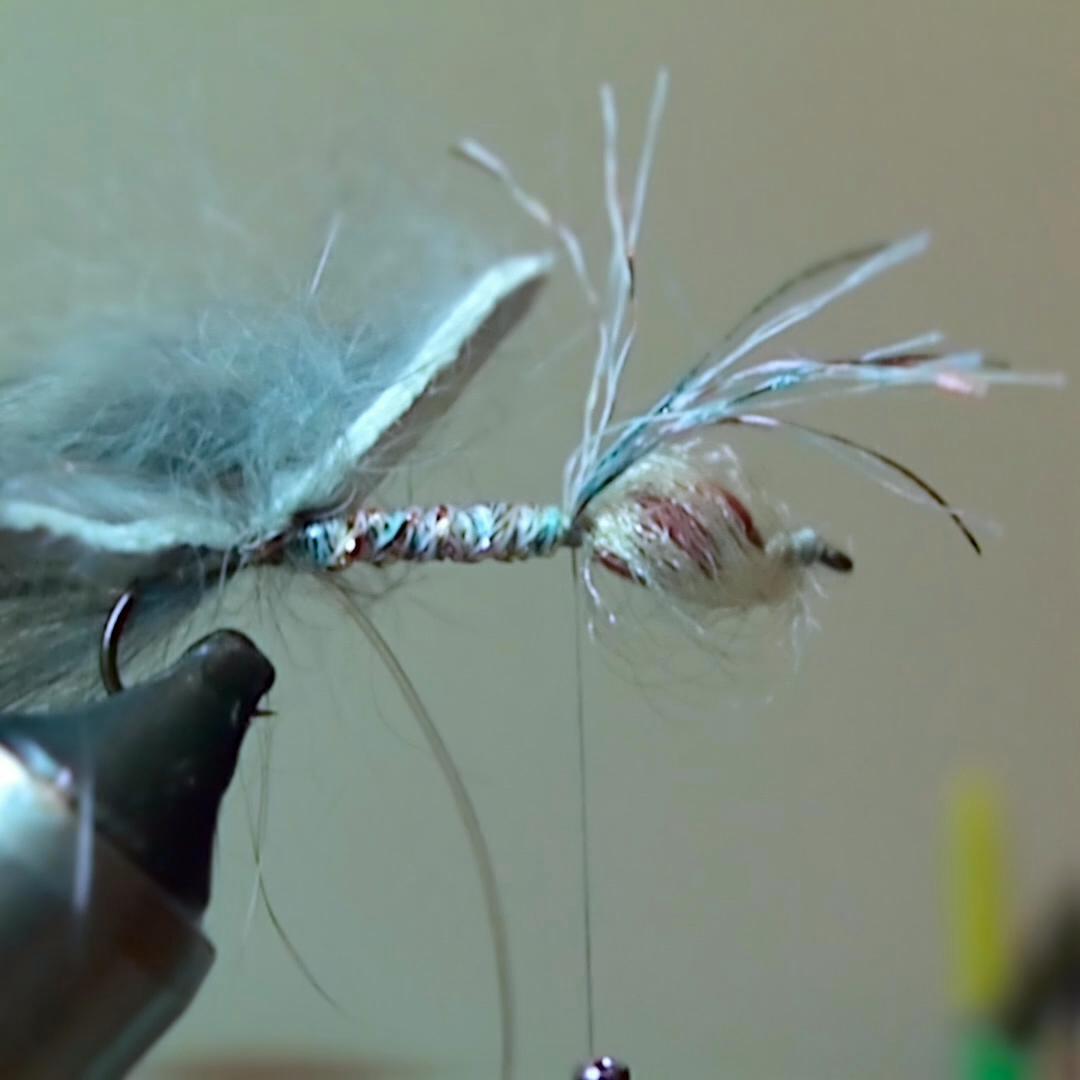 Tie in the front of the rabbit strip. Run the mono forward around the body and through the rabbit fur in three or four turns. Whip finish, and apply a little head cement to the thread and mono: 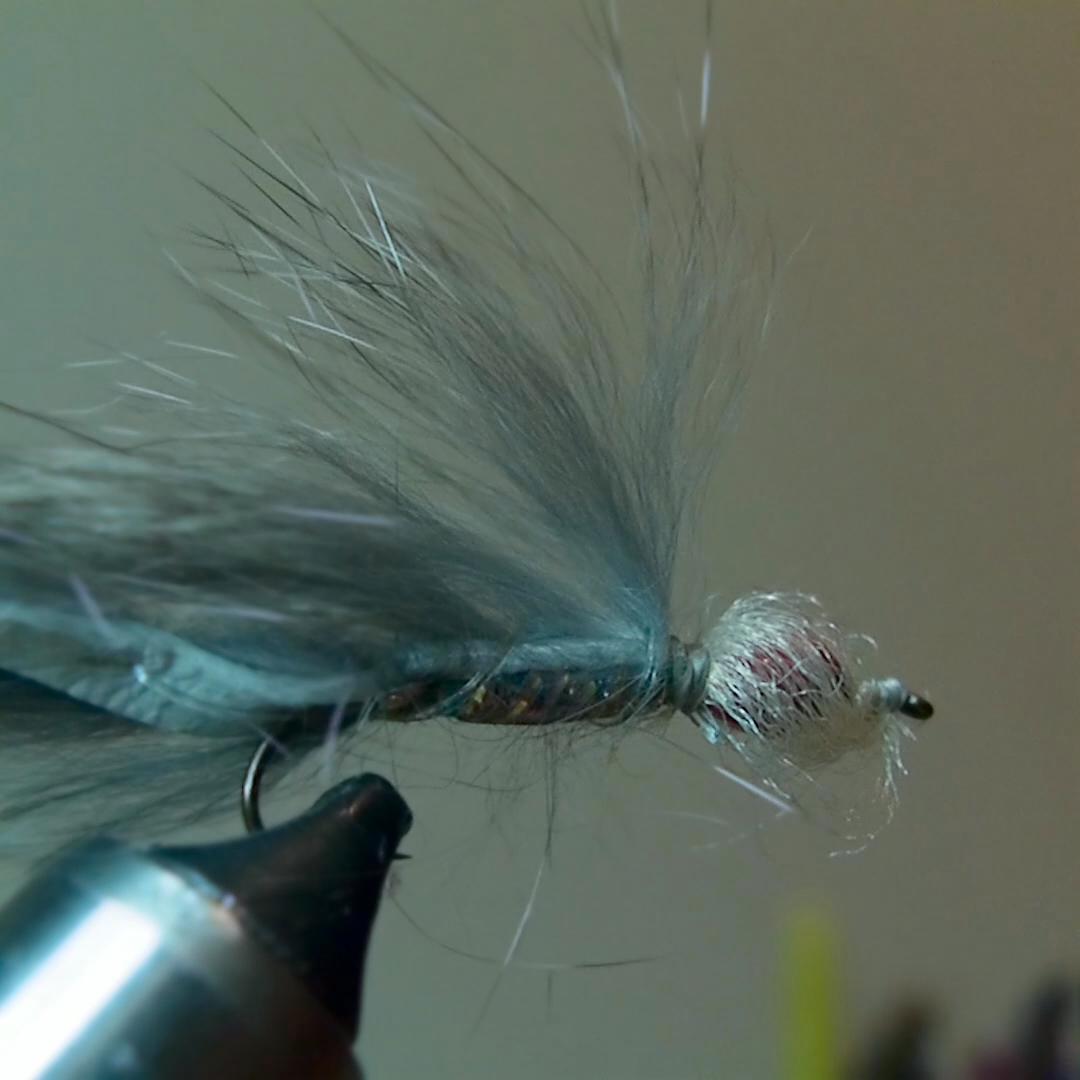 To complete the appearance of the forward egg sac, attach four pieces of tan Antron, or Zelon, just behind the eye of the hook and whip finish the thread, ( the thread is 6.0 Ultra UTC grey/brown).

Here’s a picture of the wetted fly that demonstrates that the head really does look like an egg sac when wet. 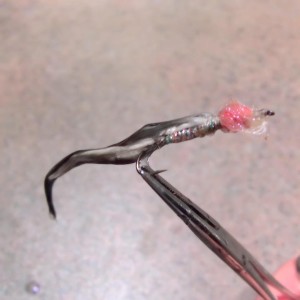 You can three quarter cast this fly downstream, then let it swing.

I have also had success in casting upstream of the fish and simulating a nymphing retrieve with this fly.