The Fly is on the tip of the right flipper of my pinball machine. 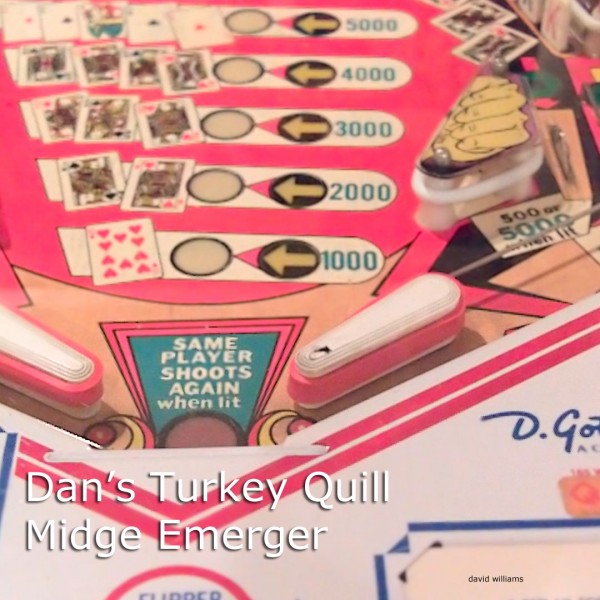 I tied this fly from a pattern named Dan’s Turkey Quill Emerger; it was the 7th December and I had the choice of putting the lights on the Christmas tree, or hiding in my man cave.

The fly was invented by Dan Berry in Cotter, Arkansas for fishing the White River and the Norfork River.
It’s a highly productive fly, especially on picky feeders, and in Arkansas it is a go-to fly for most of the guides.

Start with tying the thread one third down the hook shank: 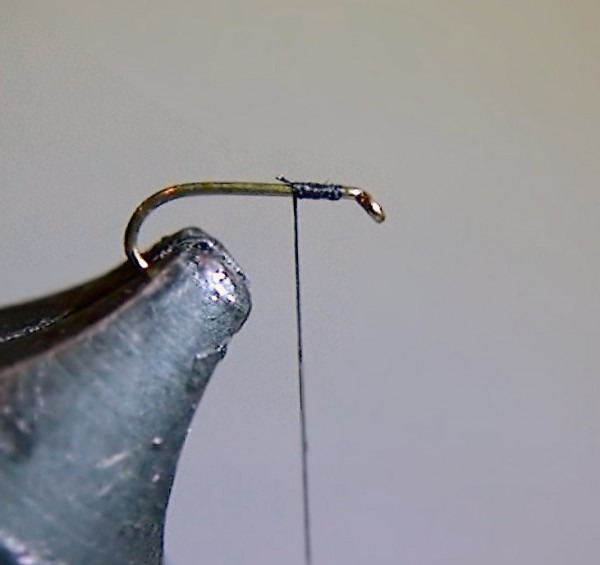 Tie in first about two inches of 7x tippet material; then tie in the tip of the turkey quill to the bend of the hook: 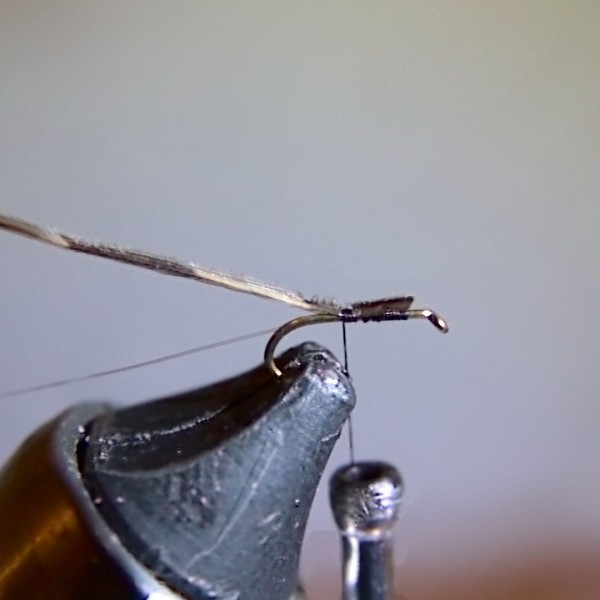 Now for the tricky part: Wind the turkey quill 2/3 rds of the way back towards the eye of the hook, and tie it off. As an assist with this it is better to have the hook point inside the vise clamp so that it does not catch on the quill and break it: 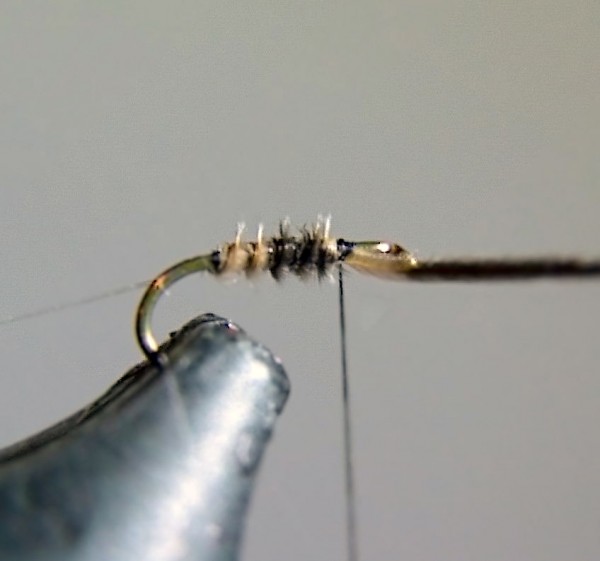 Now counter wind the tippet material over the quill and tie it off also: 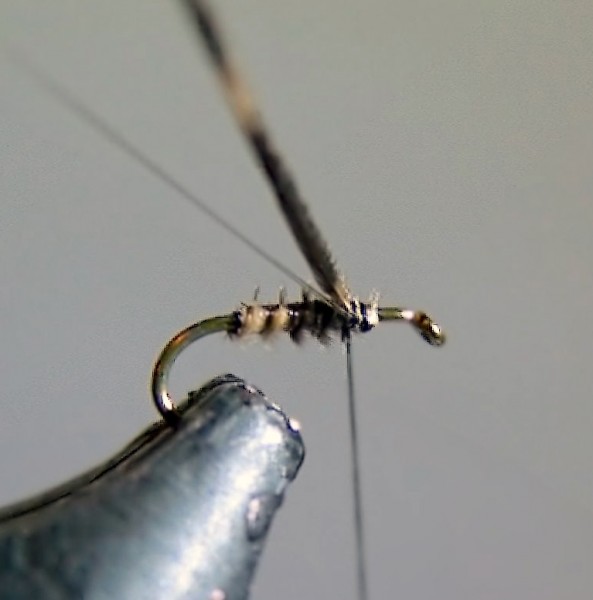 Tie a squared off piece of white antron at the same point: 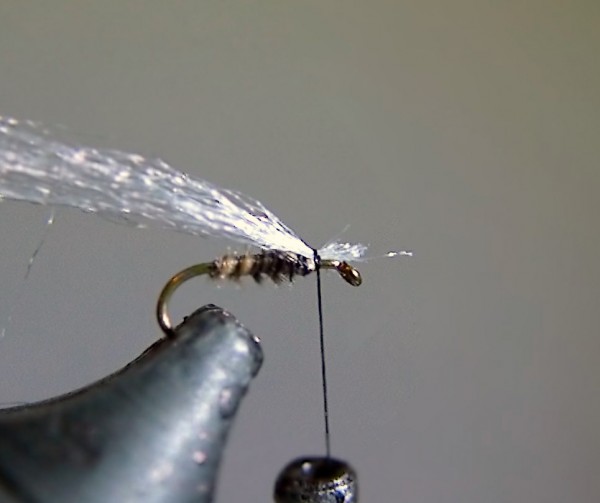 Form a loop with the Antron, approximately 3/4 of the shaft length, and tie it in. Another tip is to have the loop a little larger initially then pull it through the tie-down point to get the desired length of loop. Trim off the excess Antron: 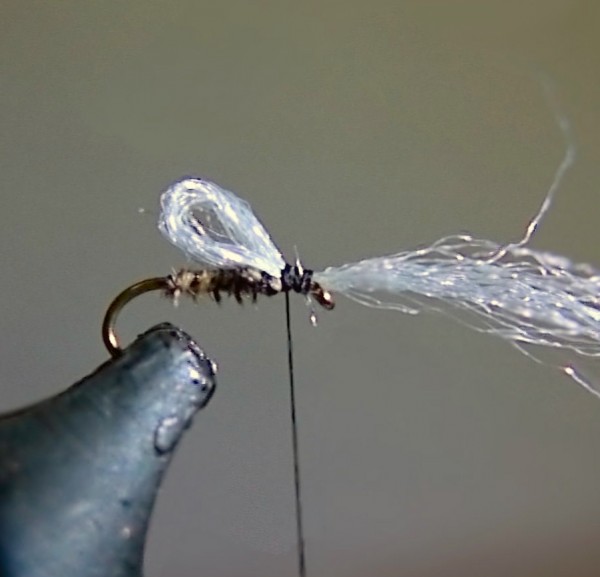 Whilst still at the same tie in point, tie in the single strand of peacock herl. 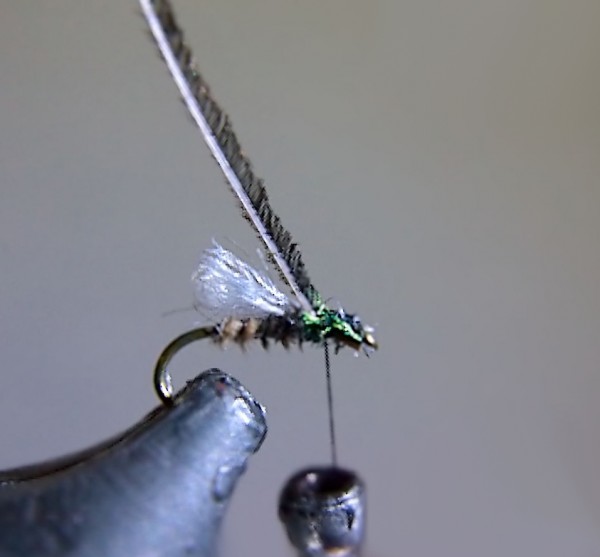 Make two wraps of the herl and whip finish:

By now you should have cursed, sworn, and even gone back to putting the lights up on the Christmas tree. This is a piddly little fly to tie; but after last year on the Grand River I know it will be a great pattern for the mid season when everything else fails, and the trout are looking for a delicate dessert. 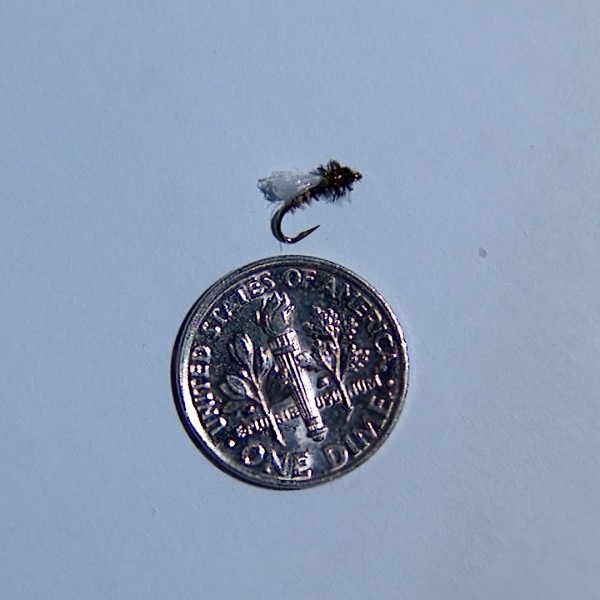 Give it a whirl, but before you even think of having a beer, and before you get so old that you need a pair of thick glasses or magnifying lens.

It is with sadness that we learned of Dan Berry’s death recently; the following is extracted from Ian James’ website:

Dan Berry – 1952-2015
Dan Berry, the creator of the Dan’s Turkey Tail Emerger, passed away in Memphis, TN, on April 15th, he was 63. Dan grew up on the banks of the White River in Arkansas, where he became one of the best guides on the river. He developed quite a few patterns, with his Dan’s Turkey Tail Emerger (DTTE) being the most famous. How good is the pattern? It’s brilliant!

At some point just about every fly fisherman creates a fishing fly. But very few can compare to the Dan’s Turkey Tail Emerger. It’s right up there with Sawyer’s Killer Bug, the Pheasant Tail Nymph, the Elk Hair Caddis and the Klinkhammer Special. Yep, the fly is that good.

I met Dan at fund-raising event for St. Judes Hospital in Cottar, AR. Straight off the bat, you had to like the guy. He called it as he saw it, he was exceedingly generous for giving you some flies, and he was always puffing on a cigar. In every sense of the word, Dan was a character and for me, a good friend. I brought the DTTE back to Canada in 2004, and within two years those in the know were thumping serious numbers of trout on the fly.

Dan developed the DTTE in 1983 to imitate as he said, “the most vulnerable part of the midge life cycle – when it is emerging.” To imitate ‘dark midges’ the most common midges on the water, the colours in the fly are drab.

Dan tied the original fly with a noodle (twisted, not a loop) of cream Poly Dubbing for the wing, but most tiers use a small section of cream coloured Antron, as I did.

To fish a DTTE, cast it across the river and then pull it under the surface. You do not want the fly to float on the surface. It is an emerger. It has to be under the surface. Here’s one thing that makes the DTTE unique, and I have never seen this happen with any other pattern. If you cast the fly at a rising fish, quite often the fly will drift past the spot where the fish was rising and you think the fish has refused the fly. Chances are, it has not. Most of the takes my clients get, happen when the fly is a foot or two downstream of the fish. The fish will actually turn down stream and whack the fly. It’s bloody awesome!

Here’s Dan’s original dressing for the fly.
When you hook a fish on it, please just say, “Thanks Dan.”

Ian also supplied a photo of one of Dan’s original DTTE: 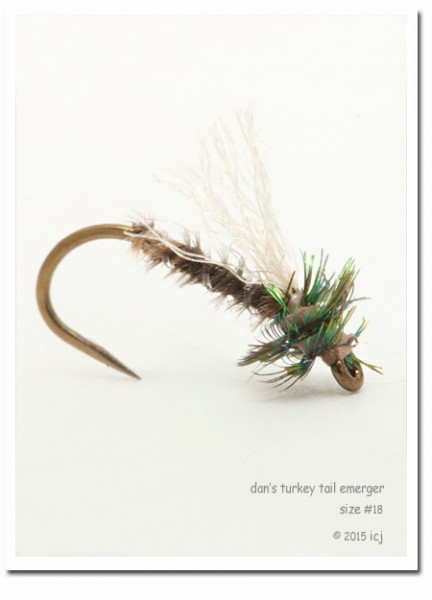