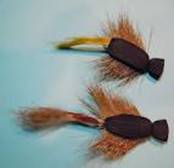 This easy mouse pattern was developed for Alaskan rainbows but it makes a great bass fly as well as a top water pattern for big brown trout and brook trout.

Tail:– natural rabbit strip with hair removed except for ½ inch at the end

-Tie in the rabbit strip tail making it about 2 hook lengths long. Cut off all the fur except the last ½ inch if you haven’t done so before hand. This gives the tail more action and makes it easier to cast.

-Cut a strip of black foam about as wide as the hook gap and taper it for about the hook shank in length.

-Tie in the narrow end at the tail with the strip facing backwards over the tail.

entire shank as well as the remaining hook shank.

-With the thread behind the hook eye, cut a narrow path through the hair on top of the hook for the foam to sit.

-Pull the foam forward and tie down behind the eye with two lose turns of thread. Pull the foam tight as you hold the hair back and out of the way as you tighten the thread.

Take several more tight turns of thread behind the foam lip then whip finish behind the hook eye by pulling the lip up.

-Trim the lip to about ¼ inch long.

-Trim the deer hair flush on the belly of the fly and trim the sides into a delta wing shape or leave shaggy if desired.

-Head cement all the thread and work some cement into the trimmed belly of the fly for added durability as well as floatability.

Note. A weed guard of 20-25 lb mono can be added to the fly if you anticipate fishing in heavy weed cover. 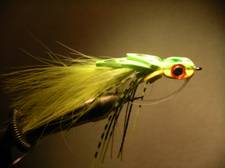 Legs:– 2 pair of yellow round rubber or Silli Legs

-Tie in a marabou plume about 2 hook lengths for the tail. Tie down the butts of the marabou well to just shy of the hook eye as this gives a nice base for the foam later.

-Tie in 2 pair of rubber legs, one pair just forward of the hook point and another pair just behind the middle of the hook shank.

-Cut 2 strips of foam (yellow and chartreuse) the same width (approx 3/8 inch) and taper one end of each to a blunt point.

-With your thread at the middle of the hook shank, gently tie down the chartreuse on top of the hook with the blunt point end pointing back over the tail about one hook shank past the bend. This tie down method involves 2 lose wraps of thread over the foam before tightening down. Use this technique for tying down all the foam.

-Place the yellow foam strip on the bottom of the hook with the point against the inside of the hook bend and tie that down. Note that all of the foam tie down wraps should be in the same place.

-Bring the thread forward between the two strips of foam to just behind the hook eye.

-Apply a small amount of super glue on the top and bottom of the hook shank from the rear tie down spot to the hook eye.

-Bind down the chartreuse and yellow foam with wraps of thread behind the hook eye.

-Bring the thread back to the rear tie down spot.

-Fold both the chartreuse and yellow foam back towards the tail Trim both flaps of foam to about half the length of the corresponding piece underneath it. Clip the corners off the two flaps of foam.

-Apply a small bead of super glue to the inside of both pieces of foam and bind them down at the rear tie down spot.

-Whip finish and cut the thread or use a drop of super glue to hold the thread in place.

-Mark the top of the fly with an olive permanent marker and apply the eyes.

-Coat the head of the fly and the eyes with UV glue and set the glue with a UV flashlight. 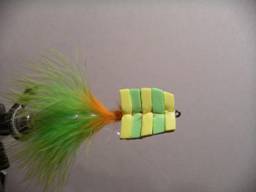 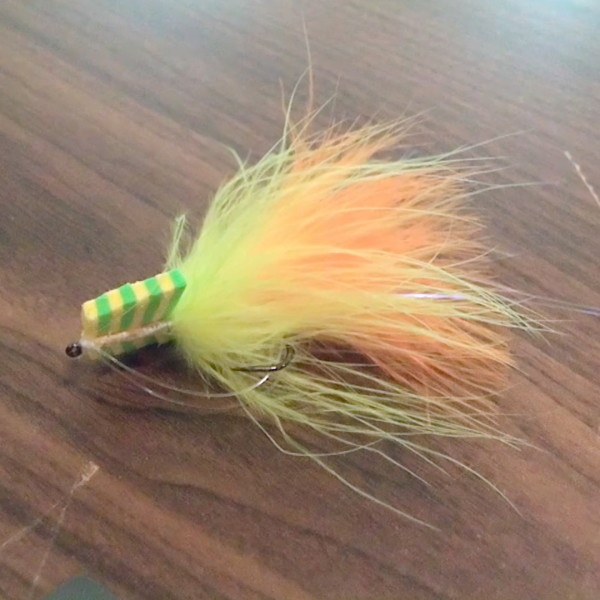 This is a simple pattern originally tied for tarpon but it works very well for largemouth bass as well.

Glue in between the segments with super glue and run a bead of super glue along the underside hook shank on the thread.

-Form a thread base over the entire hook shank and tie in the tail at the hook bend. The tail can be your choice of marabou or ostrich herl with a collar of marabou or schlappen feathers or zonker strip with a similar collar or even flared hackle legs and a hackle collar. Get creative and come up with your favourite tail. Try adding a few strands of flashabouand or rubber legs as well.

-The body is made up of short lengths of closed cell foam tied cross ways on the hook shank with figure eight thread windings.

The foam is made by gluing two different colours of sheet foam together with 3M Super 77 spray adhesive then cutting the two layers into strips as wide as the two layers are thick so that you end up with match stick like square pieces.

Gluing the foam pieces together as well as along the hook shank really stiffens up the body and locks it securely to the hook.

Like most bass flies, a weed guard can be added if needed.