June 4th and 5th, 2013
What a great time.
Ten members of the club were invited to start the event at [ Wilson’s Fly Fishing Store ] in Fergus. There we were given last minute instructions by [ Rob Heal ]. (He’s the third down on this link’s page). 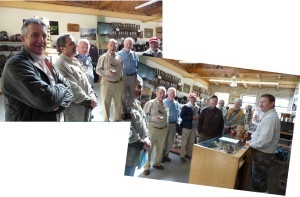 Then off to the river. 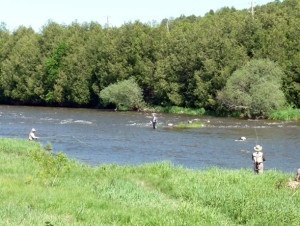 After the first day’s fishing we were welcomed at [ Drew House ] in Elora by the owners, Roger and Kathleen. 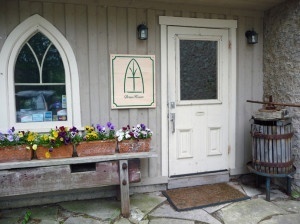 After a short chinwag in the inn garden we ate supper at The Brew House.
The following morning, some early risers met up with Rob Heal at Wilson’s at 5.15 am…….yes 5.15am; then fished at the Tombstone run.
Rob confirmed his prowess by landing a 17 incher.
Back at Drew House, at least one of us got too personal with a local: 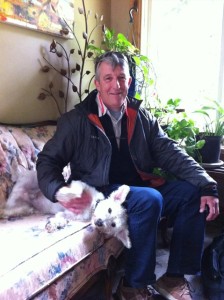 At 10am The Heavy-Lidders met The Still In-Bedders for a hearty breakfast at Drew House. 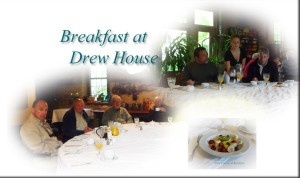 Lots of tales to tell. 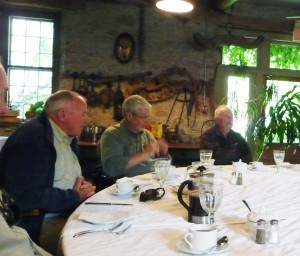 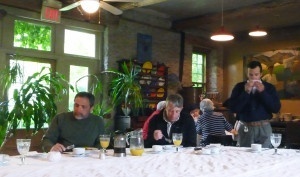 Then a friendly farewell to Roger and Kathleen, and time for a quick pic at the front door before heading out to the Grand river again. 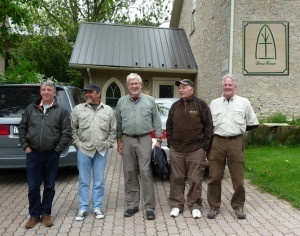 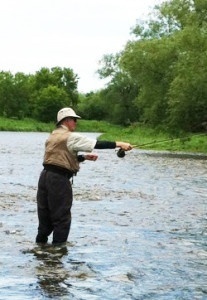 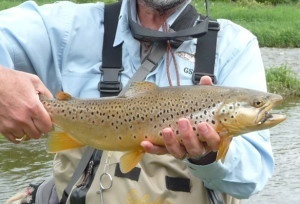 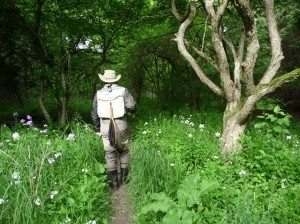 The trip was such a success that it will become an annual event; so next year do not miss out on The 2nd Annual IWFFC Grand River Outing. It will be in the first week of June.
The following are comments received since the event:

On June 4th and 5th, eleven members of our club descended on the Fergus/Elora area for two great days of fly fishing on the upper Grand River.
It was our club’s first overnight outing and everyone had a wonderful time.
Over the two days, we enjoyed some terrific fly fishing, had some great laughs and made new friend.  I saw only two other people on the river, one of which entertained us by landing a monster 22″-24″ brown – a real beauty.
New anglers and veterans alike, learned something about fly fishing and the Grand River.
There were some decent fish caught and I believe nobody was skunked.   Upon leaving on Wednesday, everyone agreed that this outing should become an annual event.
I would like to thank Kathleen and Roger of the Drew House for their help, hospitality and wonderful breakfast. They made everyone feel welcome and at home.
A special thanks, also, goes to Rob Heal of Wilson’s Fly Shop in Fergus.  Rob shared his enthusiasm, knowledge and experience both in the shop and on the river.  Rob’s invitation to join him at 5:15 a.m. on Wednesday was accepted by 5 of the members and he was kind enough to share a few of his favorite fishing holes.

Kudos to Peter for arranging the trip. Had a great time, fished the flats yesterday upstream from the bridge, one fish accounted for on a soft hackle. Two osprey were on the nest, got a picture on my cell. Good times.

Obviously didn’t make the breakfast meet. When I got to Fergus some of the guys were still at the second line so I fished the Culvert area and got a couple small ones.
I didn’t finish until just after ten, so I checked out a couple of other spots.
At one point I had stopped at the unopened road allowance just downstream of the park but decided to checkout the twin bridges area, passed on that and when I came back the parking was full.
I decided to walk into the trestle. Nice spot except for the forest of Giant Hogweed. The water was quite stained so I took a page out of your book and started throwing a big streamer. Big streamer equals big fish- wish I could say I had a Kodak moment but it zipped line off my reel and then spit the hook.

Did Chris catch any fish?

I would like to say a big “Thank You” to all the fellows at the recent IWFFC Grand River outing.
I am new to the club (I joined in April), new to fly fishing (I bought the gear this spring and have fly fished on the Credit River 3 or 4 times) and had never been to the Grand River, so I wondered what kind of experience I would have.
The outing was really well organized…all the planning of a successful outing were in place but it was all flexible so that each could join in or do his own thing.
Everyone was friendly and quick to offer help and advice and many suggested that I join them so that I would see how fly fishing was really done.
I had many, many laughs and heard more great fish stories and terrible jokes, puns and improv acts than I can remember.
I’ll be back next year!
Thanks,

Thanks to Peter and everyone that attended this week; we had a great time.
Wednesday afternoon I caught 15 stockies on a haystack pattern while Dave flogged his streamers to the success of a 4lb brown beauty…….took 20 minutes to land and gave me as much of a thrill as David did.
What a way to end a fantastic 2 days.Good company and good times,looking forward to next year.
See u in the fall.
Regards,

Dave Ponesse and I also got up at 5:15 for the  Wednesday. We went to the 2nd line bridge and fished the bridge as well as  Caddis Alley. Wilson’s provided us with the guide services of Nick (last name  unknown) for the early morning. He had to leave to go to work, so we only had  him for an hour or two. He caught a healthy 18”brown at the bridge. Dave and I  caught a few smaller ones, both at the bridge and in the alley. Then we moved on  to the Hydro Lines, and Dave was planning to fish the Trestle, when I had to  leave.