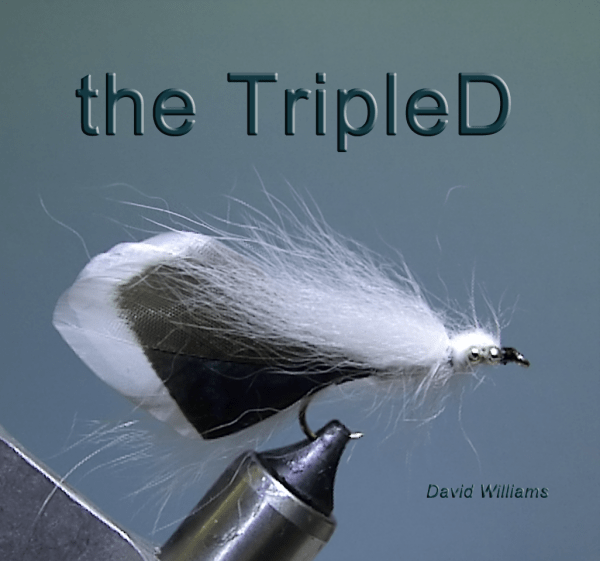 A length of plug drain chain.

The best color for the dog should be white, black, brown, or olive. A shedding white dog is preferable. Dogs with dark short fur such as Cane Corso, Doberman, and Pit Bulls may react adversely to buzzing hair clippers

If you find a dog called Olive, it is very unlikely that it will actually be a greenish hue. Olive dogs are very rare.

Notice the apprehensive look on my dog’s face when I told her that she was going to donate some fur. She is now 13 years old and luckily has two blown rear knees, which makes her easier to catch when I need more fly material.

If you were to use a duck you might choose some CDC feathers otherwise known as Cul de Canard. These feathers are from the duck’s rear end and they contain some preening oil that gives them floatation.

DO NOT under any circumstances use Cul de Canis fur from the dog; it might be gooey with brown organic material. 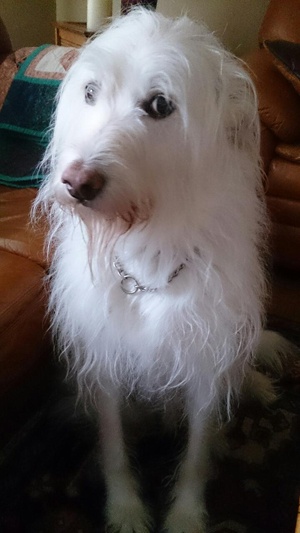 You will need to find a mallard.

You can usually see them being walked down any main street. They need to be on leads as they have a habit of selling themselves on the streets as decoys for hunters. If you see a mallard that is not on a lead and is floating motionless on the water, it is probably a wooden one and has no feathers. 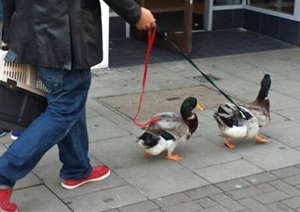 You do not need the whole duck just some mallard feathers (the white-edged blue/black ones), like these: 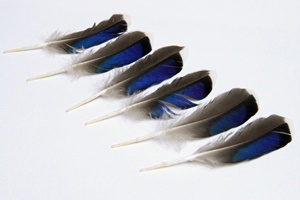 You probably have one in your basement in the “I’m going to need it sometime” drawer. 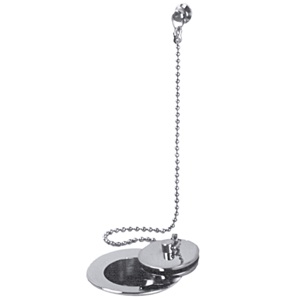 DO NOT purloin the one from your newly renovated bathroom; you know, the one in your multi-jet, night lit, candle-swathed soaker tub. That would not only lead to a dry tub, but also many more lonely nights in the dog house.

Choose a mirrored pair of feathers and trim them back so that you have two feather tips the same length. 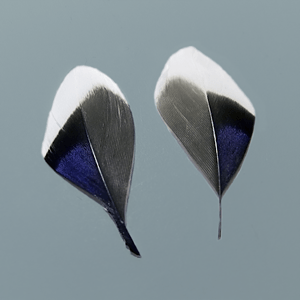 Cut two beads off the drain chain, then do it again.

Cut the beads off with old beaten up scissors, or use a pair of old nose hair clippers. 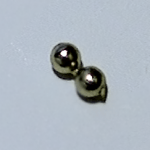 Get some dog hair. You can get into the wife’s good books by pretending that you are really going to groom the dog.

For heavens sake do not try to use electric clippers on the dog; the dog won’t like it and will probably give you, at least, a nip. Also, the track left on the dog’s flank can definitely not be explained by professing that the dog is in the early phases of chemotherapy.

Clamp the debarbed hook in the vise, and start the thread: 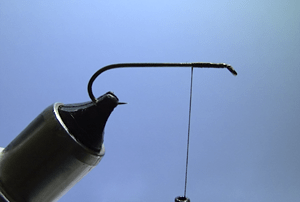 Take a clump of dog hair and tie it in above the hook barb: 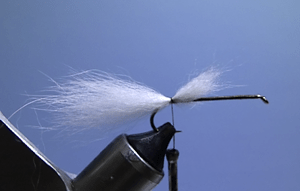 Run the thread back along the hook shank, until it is one third the way in from the eye. Tie in the pair of beads from the chain, using several figure eight wraps. Add a drop of glue on top of the eyes to prevent them from slipping: 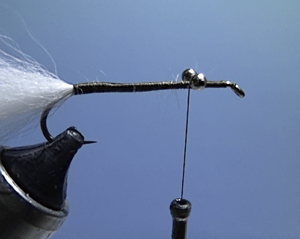 Add another pair of beads next to the first pair. Why two? Obviously any trout worth its salt would prefer to inhale this myopic bait fish with two pairs of eyes instead of one! Also, the split-second confusion that the trout has when it thinks its prey is a flat fish will give you added time to set the hook. 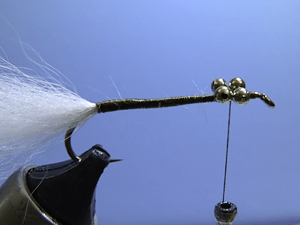 Tie in the prepared feathers, one on each side of the shank; make sure the shiny sides face outwards.

(On this fly, as the beads are on top of the shank, I have placed the lighter sides of the feathers upwards, as the fly will orient itself in an inverted position when it is in the water). 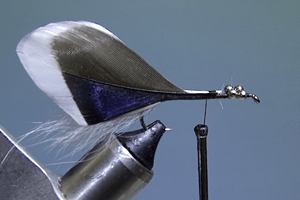 Run the thread back to the bend of the hook where the feather plumes begin: 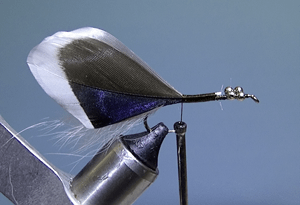 Dub some more dog hair onto the thread and wind forward to the beads: 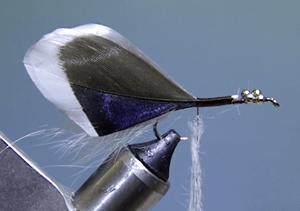 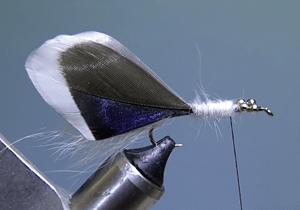 Make a split wing with another clump of dog hair tied down with figure of eight wraps: 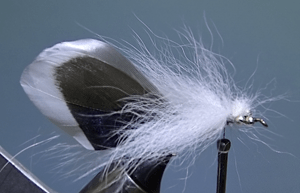 This is a top view to show how the wing is split: 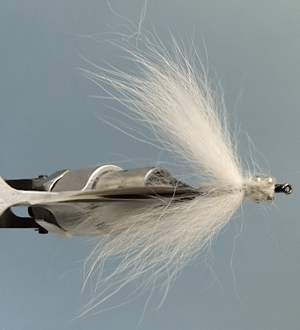 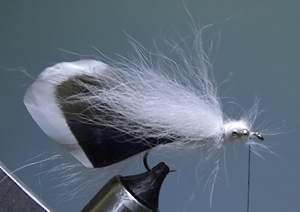 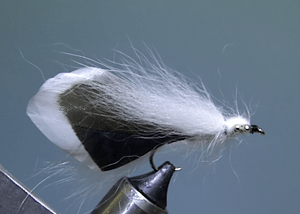 Now, if this fly doesn’t take the (dog) biscuit and land some hunking great trout, I will have to walk your dog.